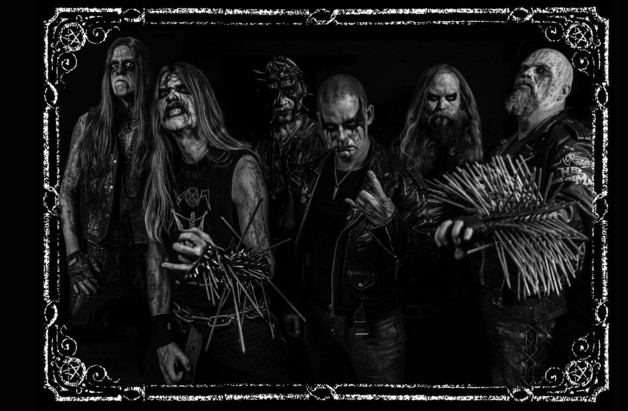 Urgehal was formed back in 1992 by Trondr Nefas and Enzifer and emerged onto the scene with massive brutality and an onslaught of fierceness that challenged even the underground of Norwegian extreme music. Their vitriolic viciousness became apparent already during the band’s demo days with ‘Ferd’ (1994) and ‘Rise of the Monument’ (1995). This raw impression was further enhanced by the release of their debut album ‘Arma Christi’ (1997). With the crushing second full-length ‘Massive Terrestrial Strike’ (1998), URGEHAL finally established its name among the most aggressive black metal hordes.

While the Norwegians remained true in their traditional approach to the style during the following albums ‘Atomkinder’ (2001), ‘Through Thick Fog Till Death’ (2003), ‘Goatcraft Torment’ (2006), and also their latest ‘Ikonoklast’ (2009) there were always slight but effective changes that added dynamics and an unholy groove. The entity known as Urgehal withholds their underground integrity and core of death-stained black metal forever and eternal.

When Trondr Nefas sadly passed away of natural causes at the age of 34 on May 12th in 2012 this also sealed the end of URGEHAL. Out of friendship, respect, and as a tribute to their late singer and guitarist, Enzifer and Uruz decided to go ahead with producing a final album. Half of the material on ‘Aeons in Sodom’ was written by Trondr with the other half contributed by guitarist and founder, Enzifer. URGEHAL invited close friends and bandmates from other projects of Nefas to contribute and those honored in this way all joined to pay homage.

‘Aeons in Sodom’ is, therefore, a very special record – a work coming from the heart that is truly keeping the faith and spirit of original Norwegian black metal. This album is adhering to the principles that Trondr Nefas demanded to be followed such as a strict policy of using satanic and misanthropic lyrics as well as a dirty and harsh sound. URGEHAL reached the end of their road with the ‘Aeons in Sodom’ album, but the black metal icons are opening the gates to hell again for an infernal remembrance of their lost but unforgotten brother, Trondr Nefas. No funeral bell chime grander and pays a better tribute and homage than mark 10 years with firing up Urgehal for some titanic black metal in hell.

The Norwegian band ENDEZZMA was found in 2006 by the front man M.Shax. M.Shax was soon to be joined by another notorious front man; Trondr Nefas of the Norwegian outcasts of Urgehal. Together they established a stronghold of hungry Norwegian experienced musicians and made few international appearances around Europe before they released their highly acclaimed underground epos ALONE, that quickly made them a name in the metal scene as a mean, diabolique force to be reckoned with, a band going their own ways. Endezzma transfer old atmosphere combined with eerie seductive modern compositions into what people want to rate or should rate as 1st class sublime nekro requiems!

The bands debut full length album "Erotik Nekrosis" was released in 2012. The very same year marked the death of Trondr Nefas R.I.P. After his death a natural vaccum occurred for the band until M. Shax found the new core of the band and could continue the march through new unexplored mystical dark fields. The Arcane Abyss album was released to exceptional reviews all over the scene, making top scores in the Norwegian metal press such as Metal Hammer as well as international. With the new talented end experienced line up Endezzma also quickly started to make a name as a highly remarkable and intense live act. With their brutal, fierce and yet esthetically mystical approach they prove that they are masters of both arenas.

The band released their third Album; The Archer, Fjord And The Thunder 2021. A album that moved the band into new epic territories with its remarkable strong material and mystical world of stellar darkness and mythical outcasts and characters. The Archer, Fjord And The Thunder album was worked , mixed and masterd by Tore Stjerna in Necromorbus studio Stocholm, Tore Stjerna Is well known for his absolute great work on the late Watain and Mayhem albums.

Endezzma have made their place in the scene as one the most energic and intense live act’s around, with their passion and ravenous sonic hunger.

Epic energy will burn the night !!

Its time to let the STELLAR DARKNESS shine !!!